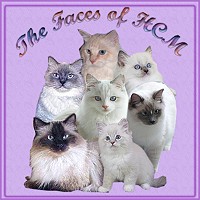 AN HCM RAGDOLL MUTATION HAS BEEN FOUND !

Make sure that the breeders that you purchase your kitten from can show you proof that parents of your Ragdoll are negative for the HCM mutation.  This will ensure that your kitten is negative.  If one of the parents is carrying the mutation, then your kitten will need to be tested to be sure that it did not inherit the mutation.

Saying that they are scanning or are screening their ragdolls is not enough.  Make sure that they have done an HCM DNA test.  A DNA test is the only way to know that your ragdoll is not carrying the deadly HCM mutation.

A Ragdoll can be carrying one mutation (heterozygous) or two mutations (homozygous).  Either mutation can be a killer and you want to have a Ragdoll that is negative from any known mutations.

For further information about testing your Ragdoll to see if it is carrying either the RD mutation or the MC mutation please contact:

What makes a harmless virus turn lethal? For the deadliest infectious disease in cats, Cornell scientists now know. After gathering the world’s largest sample collection for feline infectious peritonitis (FIP), they uncovered the holy grail of a 30-year quest for the mutation that turns it fatal. Published in Emerging Infectious Disease in July 2013, their study provides a long-sought breakthrough, opening the gates to developing the first working diagnostics, vaccines, and treatments for FIP.

Clinically dramatic and usually fatal, FIP develops when feline enteric coronavirus (FECV), a common benign intestinal virus, mutates into the malignant FIP virus (FIPV). Discovered by a Cornell veterinarian in 1963, this mutant moves from intestinal cells to white blood-cells called macrophages. Traveling through the body, it kills most cats within weeks. Kittens are particularly vulnerable, especially in shelters and catteries. Current tests cannot distinguish between the common FECV and the killer FIPV. No effective vaccines or therapies exist.

“FIP is a tragic disease for families falling in love with new kittens and veterinarians who can do nothing to stop it,” said Dr. Gary Whittaker, virology professor at Cornell’s College of Veterinary Medicine. “Comparing viral genetics, our lab found exactly what changes when FECV mutates into FIPV. Knowing this will prove pivotal in developing tests, vaccines, and treatments to protect cats from this devastating disease.” 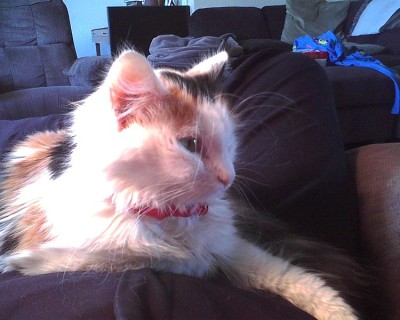 Eight month old kitten in end stage feline infectious peritonitis (FIP). Owner noted clinical signs a month before her death. She was diagnosed as likely to have FIP two weeks prior to this photo and died less than a week later.

Scientists have searched for this mutation for the last three decades. Part of the challenge, Whittaker said, might have been the scale at which they searched. Like flu viruses, coronaviruses code genes with RNA. RNA-based viruses make many mistakes when replicating, allowing them to quickly mutate, dodge vaccines and therapeutics, and move to new territory. “These viruses are so rife with mutations that even samples of the same virus from the same tissue in the same cat rarely match to the letter,” said Whittaker. “Sifting through for something that distinguishes FIPV was like looking for a needle in a haystack.”

So Whittaker deviated from the traditional broad birds-eye view, focusing instead on a specific functional part of the virus. Coronavirus particles brim with crowns of spikey proteins that activate the virus when chopped by the right proteases— axe-like enzymes in the host cell. FECV prefers proteases from its main ride, intestinal cells. When FIPV hijacks macrophages instead, Whittaker suspected its spike proteins have changed shape to respond to macrophage proteases. 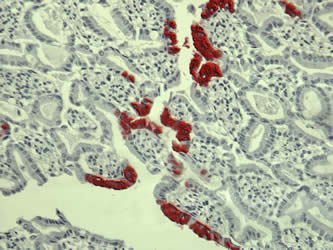 Using novel biochemical analysis and traditional comparative genomic analysis, Whitaker focused on the area where proteases cut spike proteins. He amassed an unprecedented collection of feline coronavirus, gathering hundreds of samples donated from pet owners, veterinarians, and – with help from pathologist Dr. Gerald Duhamel – Cornell’s pathology vault.
Comparing the spot in quiet FECV to the same spot in killer FIPV, he found a distinct set of differences in the spike proteins and the genes that code them. This set of mutations matched FIPV’s behavioral change and appeared across samples with consistency unparalleled in the quest for the mutation.
“Using a unique interdisciplinary approach we’ve found the first known molecular basis for FIP,” said Whittaker. “This could have implications for similar coronaviruses, such as FIPV’s deadly cousin in ferrets and another human-infecting cousin emerging in the Middle East. For now, it finally unlocks the door to developing the world’s first effective diagnostics, preventions, and therapies for FIP in cats.”
This work was funded by Cornell’s Feline Health Center, the Winn Feline Health Foundation, and the Morris Animal Foundation. 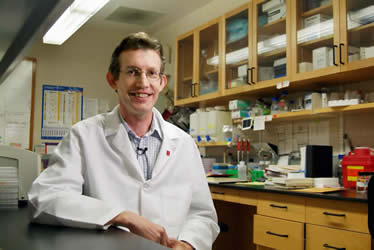